All For A Cover 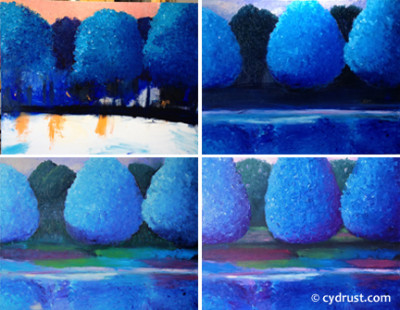 My second finger painting in oils turned out even more experimental than I had planned.

No. 2 was actually the first Finger Painting in Oils I started. I bought the paint at the end of December, when the art supply store was very limited after the holiday rush. I knew this first painting was going to probably end up a mess so I decided to ad-lib a landscape and see what I could come up with, given the paints I had.

With the colors, it was going a little surreal from the very beginning with teal trees in front, black behind, and what originally looked to be figures in the foreground. I was actually thrilled with what was appearing in the paint. Loving the feel of the paint, and enjoying the vibrancy of the oils. I liked where this first attempt was heading. I eventually began filling in the lower parts of the canvas, making the decision to bring in more vibrant colors as I worked down to the waters edge and into the tree reflections. And with that move, a new social media cover was born and now adorns my sites.

And then everything took a left turn…

I took a quick trip to CA for a business meeting and to check on my parents. I don’t think I would be incorrect in saying that most artists have a hard time leaving a painting mid stream. Particularly if they are new to the paints, or the medium.

When I came back, I just couldn’t seem to get my colors to match up. I am usually really good at mixing, but this particular brand has some unusual color names and the colors themselves are not quite the same as the acrylics I am used to. It was getting so frustrating that I just lost that “surreal” imagery in my head.

All of a sudden, all those years of “art rules” started kicking in, and I started hearing voices of past instructors talking about far images need to be the lightest, and distant colors need to be cooler and have less chroma, and it went on and on. I just seemed to loose my vision of the piece as I had originally started it.

It didn’t take too long for my black trees to disappear and be replaced by dark green and then later a muted green. I was losing the surreal look more every minute. The painting was sitting somewhere in limbo, style wise. I have spent the last week trying to salvage it, and it finally occurred to me it doesn’t need to be salvaged. It’s an experiment, plain and simple. It is “Art”

Tomorrow I pull out a fresh canvas, and begin No. 3.

In the meantime, why don’t you join me on Facebook and see what else I have been up to.