Who Answers The Call When Firefighters Need Help 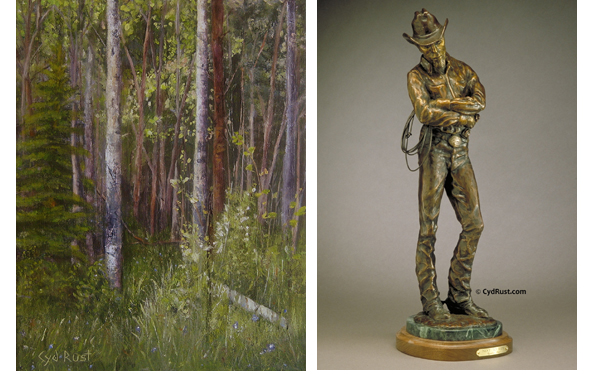 This is a difficult post to write. My memory is still filled with an almost minute by minute replay of the High Park Fire that began June 9, 2012, in northern Colorado. A memory of flames and smoke that were frighteningly visible.

Initially this monster fire was fought solely by the resident volunteer firefighter crew. As it consumed terrain, crews from across the country joined the fight.

When the fire was over, it had consumed 100,000 acres and 259 homes…eight of them belonging to the firefighters working on the blaze.

This is a really good video about the fire if you have 8 minutes to spare.

One year later, in Sept, 2013, the worst nightmare that could happen did. The burnt out areas of the High Park Fire were destroyed further by the massive rainfall and flooding that consumed northern Colorado. And once again these volunteers were called to action.

What does that have to do with Art you ask? And why should you care?

Because I have two pieces in the Richard Schmid Live Auction, and I am asking you to help me help that brave group of men and women.

40% of the proceeds go to support that same Rist Canyon Volunteer Fire Department.  Bidding starts at half the value of the pieces, so it is an opportunity to get one of my framed paintings or sculpture at a great price.

My framed original Acrylic Painting, Aspen Sentinels, will open with a minimum bid of $400.00.

You do not need to be present to bid. You can write the festivalcoordinators@rcvfd.org for the number to use the day of the auction to place a bid via telephone.

The Richard Schmid LIVE AND SILENT auctions will be held this August 31st from 10-4:00 p.m. under the Big TOP in Rist Canyon across from the Fire Station in Bellvue, Colorado.

Please help me get the word out by sharing this post. ~ Cyd